The earliest inhabitants of the area now known as Forrest were from the Gadubanud and Gulidjan language groups, who moved along trading routes and story lines in the area. Many Aboriginal heritage places are registered in the area and some local Aboriginal family groups trace their heritage to before European settlement in the 1830s.

Forrest township was developed in 1890, around the railhead established to transport Otways timber and agricultural produce to market. With the railhead and resulting commercial centre, the town came to outgrow earlier settlements at Yaugher, Gerangamete and Barramunga.

The town was named after State MP Charles Forrest, who pushed for the rail link to be made to Forrest.

Forrest’s main industry for many decades was forestry, eventually supporting several sawmills in the 1950s and 1960s, and the forestry district office. The town also supplied numerous smaller nearby sawmilling settlements, and at its peak boasted two general stores, a bank, bakery, butcher, blacksmith, post office, tea rooms, several garages and boarding houses. Forrest school was established in 1906 and by 1915, 95 students were enrolled. Its population fluctuated and peaked at nearly 100 in the 1960s.

Dairying was also a major industry, and other agricultural produce included pigs, potatoes, peas and hops.

However, timber allocations started to reduce as early as the 1960s, and mills closed one by one. The last mill ceased operations in Forrest in 2003. The dairying industry also declined in the same period. Tourism is now the town’s main industry.

The Armitage and Roadknight families were among these early squatters.

In the 1860s, colonial governments began to grapple with problem of land ownership and decided that many of the squatters’ holdings would not be recognized. The first Land Acts were passed by the Victorian Parliament, offering settlers allotments within defined agricultural areas and to purchase land at a uniform price of £1 per acre. The government also set maximum lot sizes and required occupants to develop their land. These new settlers were known as selectors, as they were able to select land to purchase.

The first selectors in the Forrest area took up the fertile river flats along the West Barwon River. The families involved were Grant, Reid, Porteus, Hennigan and Bartlett, with the Asplin family selecting further inland on Roadknight Creek.

These were mixed farms which not only produced cream and ran piggeries, but grew wheat, oats, potatoes, peas and onions, and more particularly established the first hop fields in the area. Some tobacco and hemp was also grown.

With the need for community facilities, a small township called Yaugher grew up, about two kilometres north of the site of the future Forrest township. It contained a school, an Anglican Church and a store.

The huge stands of mountain ash forest in the Otways attracted sawmillers. Mills were established from the 1860s, shipping timber from the coast or to the rail yards at Colac and Birregurra, involving a long haul on roads that were impassable in winter.

Once again to meet the community needs of workers in this area, the township of Barramunga sprang up, about six kilometres south of the future site of Forrest. There was a hotel, boarding house, store, school, church and community hall.

The rail link to Forrest

This was the age of railway expansion in Victoria and pressure was growing for a rail link from Birregurra to the foothills of the Otways, to cater for the increasing needs of farmers to get produce to market and for the cartage of timber to the city. The local member for Polwarth in the State Legislative Assembly, Charles L. Forrest, took up the cause. By 1884, the government decided to create a rail link from Birregurra, connecting a number of townships and terminating at Barramunga.

The line was to go south following the Barwon River, but the people of Lorne felt this route was too far away for a connection to the coast and it was decided to run the line through Deans Marsh. This greatly increased the cost and along with the more difficult terrain towards Barramunga it was decided to terminate the line on a flat area of Bartlett’s property about two kilometres beyond the township of Yaugher. This led to anger and a protest meeting of residents of Barramunga. (The photo of this gathering in front of the Barramunga Hotel gives us a good insight into men’s attire in the 1890s.)

At first the terminus of the rail line was to be called Yaugher but eventually it was named Forrest after the local politician who had fought so hard for the rail link.

A subdivision plan was drawn up of the township with sites being offered for sale in 1890.

The new rail terminal opened up greater opportunities for the establishment of timber mills in the bush and many sprung up connected to the railhead by a network of tram lines involving extensive earthworks, remarkable trestle bridges and even a tunnel through the hillside built by miners brought from the Ballarat minefields.

Businesses sprang up in Station Street, including the Terminus Hotel. In 1906 it was decided to move the school from Yaugher to the growing Forrest township. The Anglican Church had recently been burnt down and a fresh church was built at Forrest, along with other community facilities such as a hall.

Forrest became a thriving township, with a school population of nearly 100 students. Shops included a bakery and a butcher’s shop served by a nearby abattoir. Government offices associated with the growing timber industry were built. There were several train services a week, carting away timber and farm produce and bringing back supplies for the community.

An important event in those early days was the annual Forrest Sports Day. Special trains brought visitors from neighbouring areas and over 1000 people enjoyed a variety of athletic sports.

Extensive hop fields continued to thrive, offering seasonal employment for many women and children in the town at hop picking time. Women and children also helped with crops of potatoes and peas. Milk was mainly separated at the farm or at local creameries before being sent off to butter factories.

Closure of the bush mills and other changes

The severe bushfires in 1939 led the Government to take the view that it was unsafe to continue the timber settlements in the bush. It was also decided that the bush sawmills should close and mills should be established in townships. The mills established in Forrest became major sources of employment and changed the character of the township.

The arrival of motor vehicles in the 1930s made it easier for people to shop in the nearby city of Colac. With the arrival of electricity in the late 1950s – and the availability of modern refrigerators – local businesses like the butcher, bakery and general store slowly declined. With fewer train services, Station Street became less important and the focus of the community tended to move to the main road. The community hall burnt down in 1963 and a new one was constructed on the main road, adjacent to the Anglican Church and the school.

By the 1930s, rail travel had diminished to the point where it was uneconomical to run frequent steam trains, so a modified Dodge car accommodating about 16 passengers ran on the train lines several times a week to Birregurra. Its black and yellow stripes led to it being called “The Tiger” and it is still well remembered by local residents.

In the early 1960s the authority responsible for Geelong’s water supply decided to build a dam on the West Barwon River, just above the Forrest township. For a period this brought an influx of construction workers and additional employment for locals.

From forestry to tourism

By the end of the 20th century – with diminishing timber reserves and pressure to conserve the remaining native forest in the Otways – sawmilling had declined. As logging in native forests ceased in 2005, authorities looked for ways to develop the future economy of Forrest. Funds were devoted to promoting tourist facilities, including the creation of 30km of mountain bike tracks.

Over the next 10 years Forrest underwent a remarkable development, catering for the growing number of visitors to the township. Annual mountain bike events now bring up to 3000 competitors and visitors into the township each year.

This has resulted in the establishment of a successful brewery/cafe, coffee shop/bike store, a revived guest house and a renovated hotel, now called the Wonky Donkey. Christmas and Easter holidays often see the camping ground full to capacity.

While dairying and other local industries have declined, the township has become popular for retirees and those seeking an alternative lifestyle. Forrest township has an exciting future.

Find out all the latest news from the Forrest Post 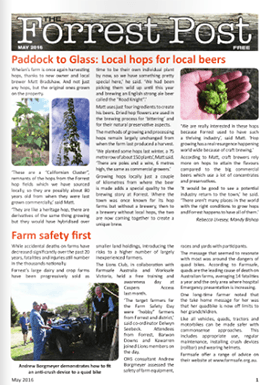